“Interest in this project stems primarily from its association with the neighbouring properties which host two of the world’s largest high-grade uranium mines in operation today” said Scott Frostad, VP Exploration at Purepoint.  “While these results improve our expectations, further detailed geophysical analysis will be required here before drill targets are finalized”.

The McArthur East ground gravity survey results show that a low gravity response correlates with the property’s primary exploration target. The prospective area was previously defined by a magnetic low and an airborne electromagnetic (EM) conductive zone.  It is now thought that the gravity low, as well as the magnetic high and broad conductive area, is reflecting pelitic basement rocks and/or hydrothermal alteration.

Preliminary exploration of McArthur East has provided evidence of graphitic pelitic rocks occurring along the northern flank of a magnetic high that is believed to be granitic rock. The highly competent granitic rock would provide a contrast in competency to the softer graphitic pelitic rocks and be favourable for zones of dilatancy and mineral deposition. Next steps include resolving the conductive zone into discreet conductors for drill testing, most likely with a stepwise moving loop EM survey. No drilling has occurred on the project to date.

The 100% owned McArthur East property adjoins Cameco’s McArthur River project, which contains the world’s largest high-grade uranium deposit, and is situated due south of the Cigar Lake Mine.  The property is 1,985 hectares in size and consists of 1 claim. It is underlain by a magnetic low believed to represent pelitic basement rocks, a typical host rock for economic uranium mineralization.  Based on historic drill results from the surrounding area, the unconformity is assumed to lie approximately 250 metres below the surface. To date, no drilling has occurred on the McArthur East property.

Exploration conducted by Purepoint on the project has consisted of a helicopter-borne EM and magnetic (VTEM max) survey carried out in 2013 and the recent ground gravity survey. The airborne EM survey results showed that a broad conductive area in the northern portion of the property was a response from the basement rocks while weak conductors located within the southeastern area of the property are probably a response from swamp or lake bottom sediments. The broad basement EM conductor is thought to represent a series of closely spaced graphitic units and is considered to be a prospective exploration target. 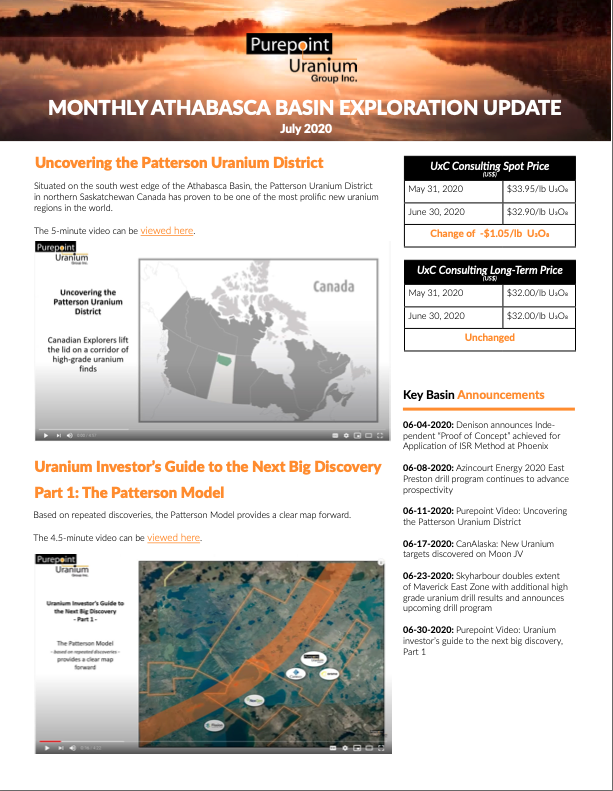 Purepoint Uranium @PurepointU3O8
7 days ago
#Uranium Investor's Guide to the Next Big Discovery - Part 1: The Patterson Model. Located on the western edge of Northern #Saskatchewan prolific #AthabascaBasin, home to the largest uranium finds of this century.
https://t.co/2flXgEMO8O
View on Twitter
3
10

Purepoint Uranium @PurepointU3O8
4 weeks ago
Anyone watching @NexGenEnergy_ , @FissionUranium or @PurepointU3O8 should take a look at this recap of the Patterson area
#uranium #u308 #athabascabasin #nuclear
https://t.co/tkjQjuLkZA
View on Twitter
5
20 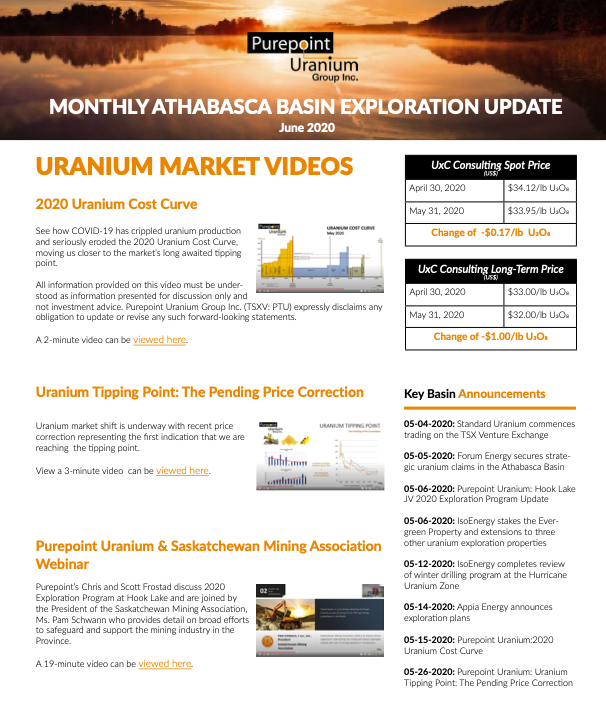