“We have now correlated the Spitfire and recent Harpoon results to interpret a deposit that bridges the claim line with our neighbour NexGen” said Chris Frostad, President and CEO of Purepoint. “In February, after outlining additional mineralization at Spitfire, the JV Partners prioritized exploration efforts on the untested portion of the Patterson Shear Zone. Our exploration to date has just scratched the surface and we have considerable room within the project for more Tier 1 deposits along strike.”

New maps and diagrams are now available on our website www.purepoint.ca.

“The Patterson Shear Zone is obviously well endowed with uranium and we are determined to demonstrate the shear’s potential to host additional high-grade deposits as we move the drills northwest,” said Scott Frostad, VP Exploration at Purepoint.  “We now have a clear understanding of the geology and structural controls of the high-grade mineralization at Spitfire and have confirmed many of these key attributes at the Dragon Zone.”

Once again, Purepoint will be hosting a public webinar to present and discuss the results of this program:

Six drill holes totalling 2,152 metres were completed this season in the Upper Spitfire mineralized zone with two holes (HK16-55 and HK17-60) returning high-grade uranium intercepts (Purepoint PR of Feb 2, 2017). The three holes testing the Upper Spitfire mineralization down-dip, HK17-57, 58 and 62, intersected the graphitic shear but it was not associated with radioactivity. One of the six holes, HK17-64, targeted the Spitfire graphitic shear on the northern side of an interpreted east-west fault. The HK17-64 hole intersected a major structure but did not intersect the graphitic shear or anomalous radioactivity.

The Spitfire mineralization has been correlated with the recent NexGen results from their Harpoon discovery (NexGen PR of March 23, 2017) by Purepoint and both a long section and plan map are available on the Purepoint website. No drilling was conducted by Purepoint during 2017 proximal to the Harpoon discovery. A review of the recent Spitfire geochemical and televiewer results along with the recent Harpoon results will be completed before further drilling is recommended for this area.

Hole HK17-72 was spotted by backing up the drill 80 metres from the HK17-70 collar location as a follow-up to the anomalous radioactivity and strong clay and chlorite alteration encountered in the basement rocks of that hole. The unconformity was reached at 310 metres, a strongly clay and chlorite altered granodiorite gneiss was drilled to 360 metres, mafic intrusive with strong clay and hematite alteration was then encountered to 385 metres followed by 6 metres of hydrothermal quartz. Elevated radioactivity (100X background) is associated with steeply dipping north-south trending structures (from televiewer results) between the depths of 378 and 380 metres. Clay-altered granodiorite gneiss was drilled from 391 to 432 metres, and then a mafic intrusive cut by two graphitic shear zones was encountered to 500 metres before the hole was completed within carbonatite at a depth of 530 metres.

Hole HK17-73 was drilled 600 metres northeast along strike of HK17-72 and intersected hydrothermal quartz, a 100-metre wide shear zone within granodiorite gneiss associated with clay and hematite alteration, a graphitic shear zone hosted by a mafic intrusive, and was completed within a carbonatite. HK17-74 was collared approximately 1.2 kilometres southwest of HK17-72 and intersected mafic dykes, graphitic shear zones and a wide chloritic shear before being completed in unaltered granodioritic gneiss. Holes HK17-73 and 74 did not encounter anomalous radioactivity.

Drill Hole HK17-75 was a follow-up to the favourable alteration and radioactivity encountered by HK17-72 and was spotted by moving the drill 200 metres southwest along strike from the HK17-72 collar location. Unfortunately, the hole was lost at a depth of 204 metres within a pressurized sand seam similar to those present within the Spitfire Zone.

Ten holes totalling 3,995 metres were completed within the Hornet Zone this winter. Three drill holes, HK17-56, 59 and 61, tested the Spitfire Shear along strike to the northeast. The graphitic shear intersected within these holes was still associated with chlorite altered granodiorite gneiss, however, the shearing was less well developed, clay alteration was spotty, and radioactivity was limited to weak gamma spikes associated with narrow cross-cutting fractures. Two drill holes that tested EM conductors within the large magnetic low anomaly (HK17-63 and 65) intersected relatively narrow, weakly sheared graphitic units within granodiorite gneiss. The explanation for the magnetic low is now considered to be a lack of magnetic mafic dykes that are common within the Spitfire Zone. Two holes, HK17-66 and 68, tested an apparent break in the Hornet EM conductor and encountered unaltered granodiorite gneiss that hosted graphitic shears with no significant radioactivity. Two holes, HK17-67 and 69, tested the Hornet EM conductor approximately 800 metres northeast of the Hornet showing and both intersected hydrothermal quartz and a wide mafic intrusive that hosted graphitic shears associated with weak radioactivity. One hole, HK17-71, was collared on the northeast shore of a lake (~ 1.1 km NE of HK17-67) to target a right-step in the EM conductor having the same orientation as the Arrow Deposit. The hole primarily drilled unaltered granodiorite gneiss and an explanation for the EM conductor at this location was not intersected. A follow-up hole to test the right-step in the conductor will need to be drilled from lake ice.

eU3O8: a uranium equivalent grade derived from downhole gamma ray logging results and should only be regarded as an approximation.

Deposit: a natural occurrence of mineral or mineral aggregate, in such quantity and quality to invite exploitation (CIM Definition Standards, 2003).

The Hook Lake JV project is owned jointly by Cameco Corp. (39.5%), AREVA Resources Canada Inc. (39.5%) and Purepoint Uranium Group Inc. (21%) and consists of nine claims totaling 28,683 hectares situated in the southwestern Athabasca Basin. The Hook Lake JV is considered one of the highest quality uranium exploration projects in the Athabasca Basin due to its location along the prospective Patterson Lake trend and the relatively shallow depth to the unconformity.

Purepoint Uranium Retweeted · Global Business Reports @GBReports
2 days ago
Is the uranium price increase over the first half of 2020 an indication that the industry finally needs new uranium mines?

Purepoint Uranium @PurepointU3O8
2 weeks ago
With #uranium demand projected to grow steadily by 1.5% annually, 2020 has already seen a significant price increase for uranium, and the upcoming decade promises to be an interesting one for the commodity. https://t.co/fqt9BzpdqH
View on Twitter
1
7

Purepoint Uranium @PurepointU3O8
3 weeks ago
September's Athabasca Basin Exploration Update is now available. All you need to know about #uranium #exploration in the #AthabascaBasin
https://t.co/vg9tX5uqLD https://t.co/ZJ8wx6elGb
View on Twitter 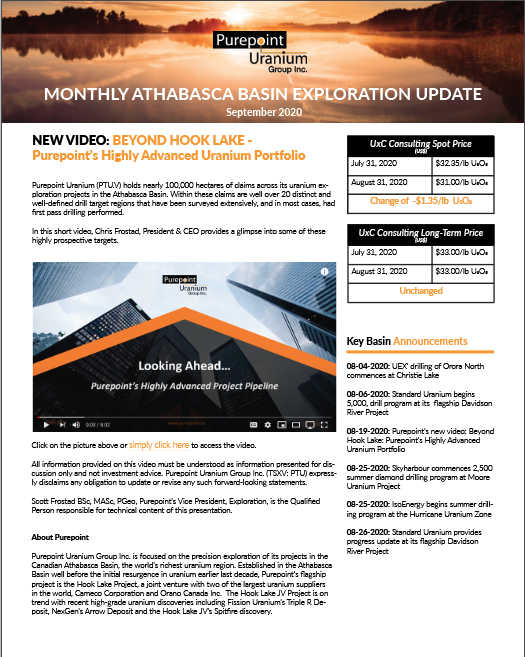 Purepoint Uranium @PurepointU3O8
4 weeks ago
In this short video, Chris Frostad provides a glimpse into some highly prospective #uranium targets that spans across 100,000 hectares of claims in the #Athabasca #Basin beyond #HookLake
https://t.co/9q1x1lPTKf
View on Twitter
3
11