Toronto, Ontario, February 25, 2020 – Purepoint Uranium Group Inc. (TSXV: PTU) (“Purepoint” or the “Company”) today provided an update of this winter’s exploration program at the Hook Lake Project, a joint venture between Cameco Corporation (39.5%), Orano Canada Inc. (39.5%) and Purepoint (21%) in the Patterson Uranium District, Saskatchewan Canada. The Hook Lake Project lies on the southwestern edge of Saskatchewan’s Athabasca Basin and is adjacent to and on trend with recent high-grade uranium discoveries including Fission Uranium’s Triple R deposit and NexGen’s Arrow deposit.

“Our drill is currently setting up on the first of our two lake targets following the month-long construction of flood ice.  This lake hole will represent the initial test of the conductive shear outlined between the Spitfire Zone and the Dragon area in 2019.” said Scott Frostad, Purepoint’s Vice President of Exploration. “In addition, this year’s electromagnetic geophysical survey has been completed and has provided five new drill targets northeast of last year’s hole HK19-105 that intersected numerous shear zones, strong hydrothermal alteration and elevated radioactivity (up to 125 ppm U over 0.3 metres). We anticipate testing at least one of these geophysical targets during this drill program”.

Three holes have been completed on the southern portion of the “W” Conductor testing a strike length of approximately 1.5 kilometres. The electromagnetic (EM) conductor was explained by graphitic shear zones in these holes and a single hole was completed southwest of the Hornet zone explained the EM conductor. Assays are pending.

Three to four drill holes are still to be drilled this season.

The geophysical survey completed last month consisted of five lines of stepwise-moving loop EM surveying, 800 metres apart and has provided initial targets covering 4 kilometres of conductor strike length. At least one of these EM targets will be drill tested this season.

Complete program results will be made available once all drill data is returned, interpreted and reviewed by the joint venture partners.

Purepoint Uranium Group Inc. is focused on the precision exploration of its nine projects in the Canadian Athabasca Basin, the world’s richest uranium region. Established in the Athabasca Basin well before the initial resurgence in uranium earlier last decade, Purepoint’s flagship project is the Hook Lake Project, a joint venture with two of the largest uranium suppliers in the world, Cameco Corporation and Orano Canada Inc.  The Hook Lake JV Project is on trend with recent high-grade uranium discoveries including Fission Uranium’s Triple R Deposit, NexGen’s Arrow Deposit and the Hook Lake JV’s Spitfire discovery. 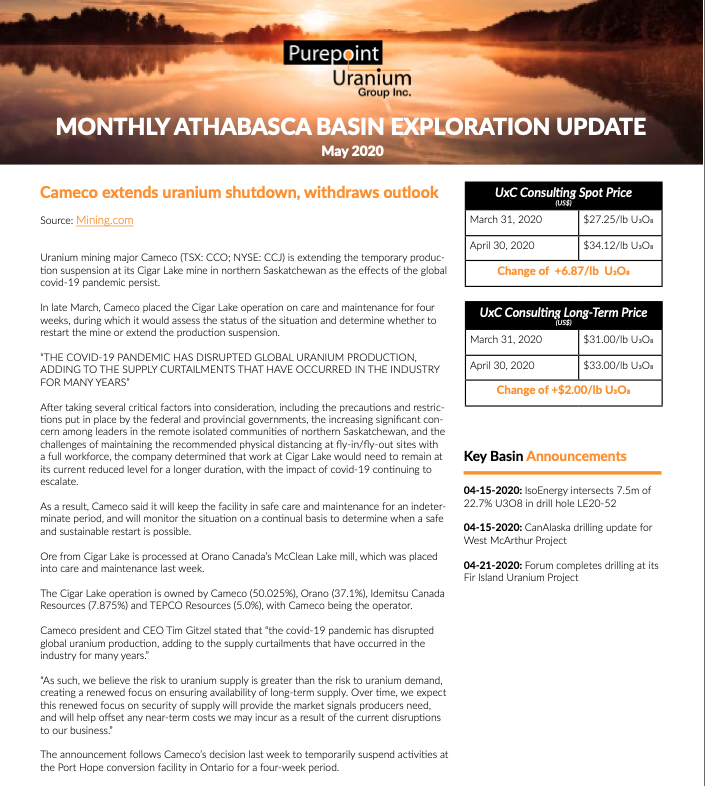