Highly Qualified Team with Decades of Experience in the Basin

A founding partner bringing 35 years of expertise to his position as President and CEO, Chris Frostad led Public Companies in both the technology and mining & metals industries.

Throughout his career, he has been instrumental in the development and building of a variety of high growth, early stage, public and private companies. Mr. Frostad sits on the board of Enthusiast Gaming Inc. (TSX:V EGLX) and is a former CEO and Director of Minera Alamos Inc. (TSX:V MAI), a Mexican based gold development company.

Prior to Purepoint, he held numerous senior positions in the technology industry including CEO in Residence of a Toronto-based Venture Capital firm.  Mr. Frostad is a Chartered Accountant and a Chartered Professional Accountant who began his career in International Taxation with Deloitte. Scott Frostad’s experience in the mining industry throughout Canada spans over three decades. He brings to his position as Vice President of Exploration a background in mineral exploration with renowned mining companies such as Lac Minerals, Teck and Placer Dome. Most recently, he was Environmental Specialist for Cogema Resources Inc. and managed environmental issues at both the Cluff Lake and McClean Lake Uranium Mines in Northern Saskatchewan. Frostad is a graduate of the University of Western Ontario with a B.Sc. in Geology, and holds a M.A.Sc. in Mining and Mineral Process Engineering from the University of British Columbia. He is a Member of the Association of Professional Engineers and Geoscientists of British Columbia and the Association of Professional Engineers and Geoscientists of Saskatchewan. For over 50 years Roger Watson has served the mining industry providing his geophysical expertise to countless projects around the world. In 1972, Watson founded the firm of Paterson, Grant and Watson Ltd. to provide a broad range of geophysical consulting and interpretation services. During this time he oversaw large scale projects in Algeria, the Ivory Coast, the United States and Canada. In 1984 he was a founding executive at Terraquest Ltd., a company specializing in airborne magnetic and VLF electromagnetic surveys. Watson ran approximately 400 surveys in Canada, the United States and the Caribbean. Prior to his position as Chief Financial Officer with Purepoint, Ram Ramachandran brings an 11-year tenure as Deputy Director and Associate Chief Accountant with the Ontario Securities Commission. Most recently, Ramachandran provided advisory services in the area of litigation/compliance to numerous companies. To his credit, Ramachandran conceived, developed and launched the Canadian Securities Reporting Advisor – an on-line compliance tool for public companies. Linda Tong has been Purepoint Uranium’s GIS Specialist since January 2006. She has over 20 years experience in GIS application, GIS development, and computer programing. Linda Tong is a graduate from Wuhan University with a B.Sc. in Computer Science & Application. Jeanny So has over 20 years experience in Operations, Investor Relations, Sales & Marketing in the financial industry and has  executed corporate communication programs for several private and publicly-listed companies. She is a member of Prospector and Developers Association of Canada (PDAC) and Women In Mining, Toronto Branch. Quality team comprised of independent, highly qualified experts with decades of experience in the Athabasca Basin

Purepoint Uranium @PurepointU3O8
7 days ago
US uranium purchases slightly up for 2020: EIA 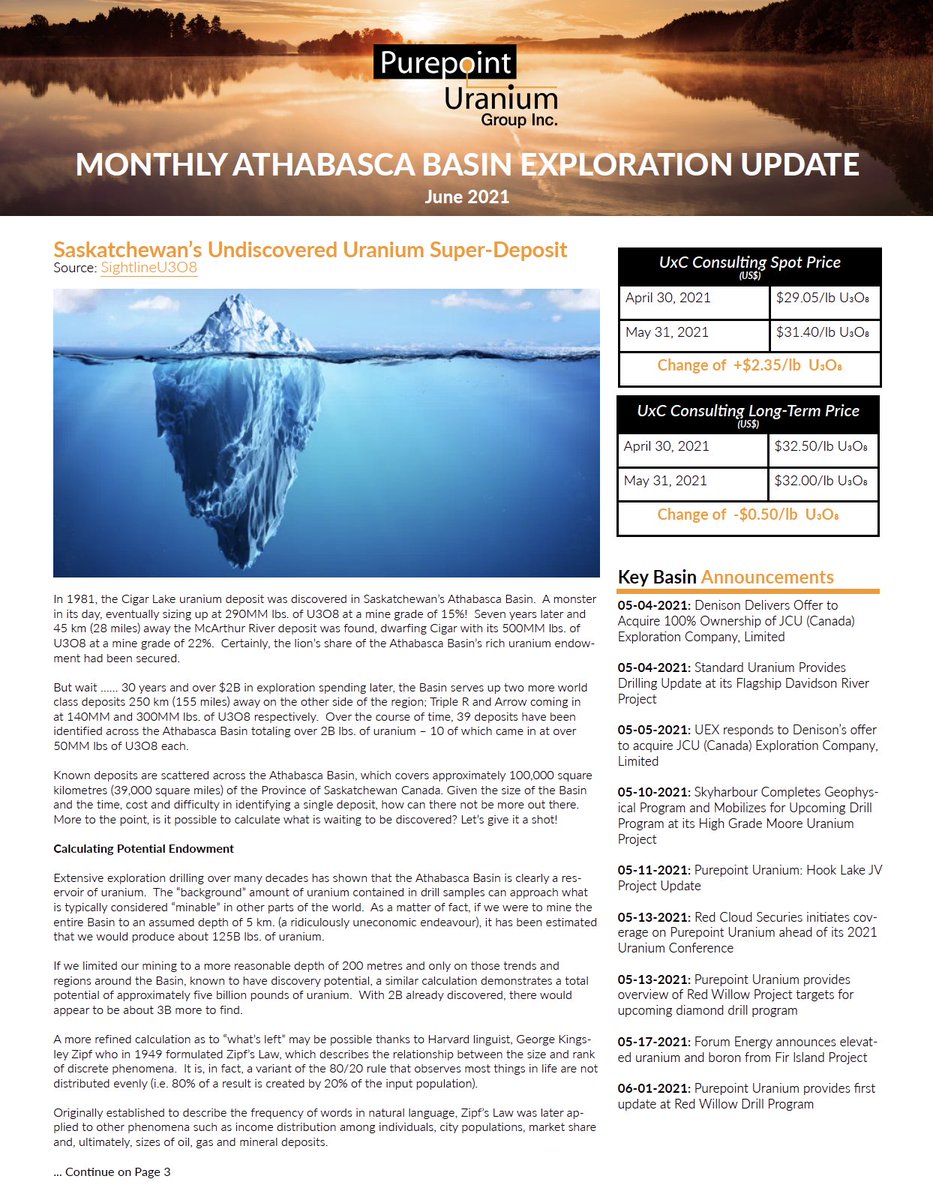